Maggie was one of five pugs rescued off the street in Korea in 2018, emaciated and in poor shape. Before her adoption, she had undergone a double hernia surgery due to excessive puppy-bearing, multiple hormone injections to conceive, and plain old genetics. And at some point in the past, her bottom jaw was fractured. Once she healed, she hopped on the plane to meet her mom, Diana!

How did you happen upon Maggie?

Our sweet old guy, McLovin’ the Love Pug, left us in June 2018. I couldn’t imagine life without a pug. We were looking at Pug Nation in L.A., and that led us to Pug Rescue of Korea. We saw her picture online, and I knew she was meant to be part of our family!

How did you know she was the “one?”

We saw her picture on Facebook, and I just knew she was our dog. I’d always wanted a black pug, and she was just so darling! 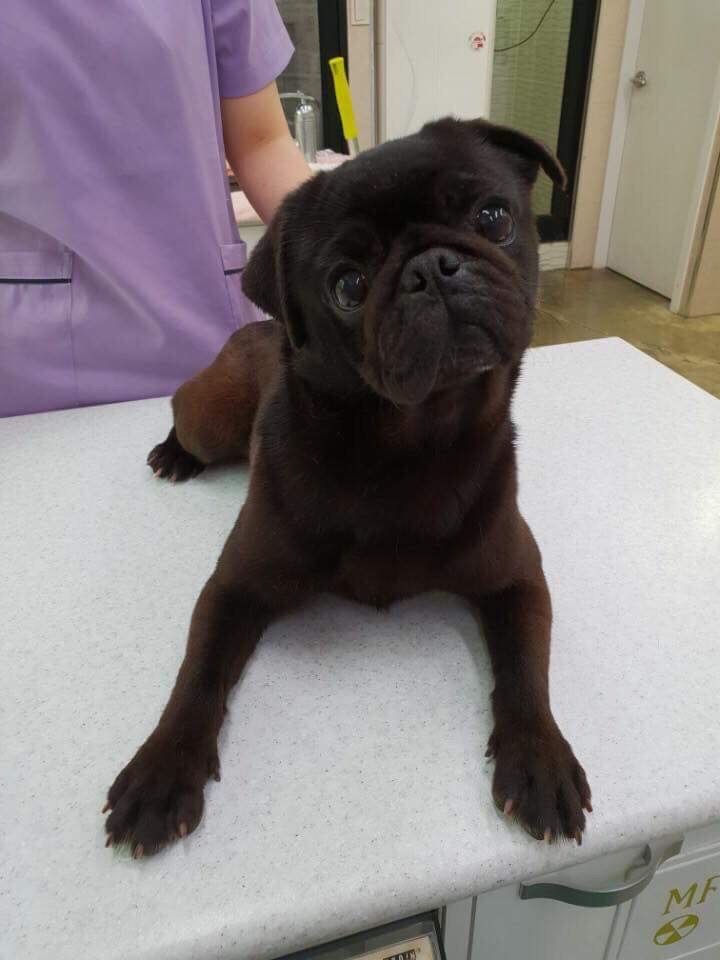 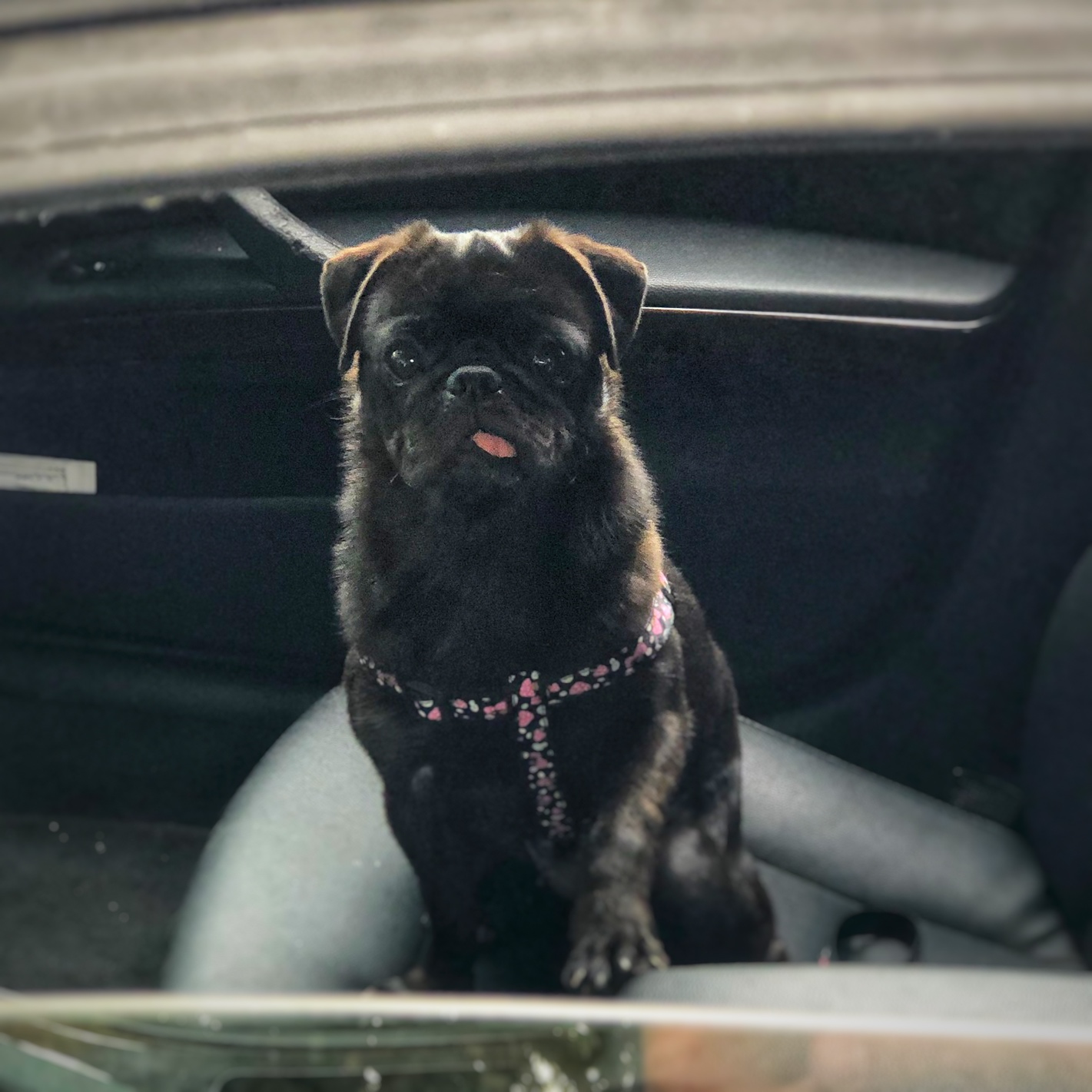 The picture that won over Diana

Describe the day and your feelings the moment you met your pug.

My husband had to work, so my dad and I drove from Sacramento to Long Beach the day before. Maggie was being fostered by the wonderful Jennifer Flores-Watson and Johnny Baker. They had been sending me daily pics and videos. We met them the next morning at a dog park. She was so tiny! My last pug was 24 pounds, but Maggie was this itty-bitty thing! She was actually pretty calm (this lasted approximately 8 hours and then she turned into the spaz we know and love). My dad held her for the 7-hour drive back while she snoozed. When we got home, she met her new dad and sister, Scout, our Formosa Mountain Dog rescue. They’ve been inseparable ever since!

She HATES insurance commercials. Two seconds into one, and she’s off the couch barking at the TV.

Maggie has many names: Maggie Moo, Lil’ Moose, Margaret or Moosifer when she’s naughty. Her theme song is Wrecking Ball as she is a bull in a china shop. She is incredibly sensitive to crying animals on TV-- I’m sure due to the fact she’d had so many puppies. She will watch TV all day if we’d let her. She HATES insurance commercials. Two seconds into one, and she’s off the couch barking at the TV. It’s actually her party trick for friends who can’t believe that she can tell insurance commercials from all others. She is the silliest, most playful, gregarious girl. She makes us laugh daily!

How has Maggie fit in with your family and in your home?

She’s a crazy banana so she fits right in! She loves her sister, and they’re often playing or snuggling.

What’s her favorite food, or is there anything your pug won’t eat?

Carrots. It’s her go-to treat as she’s watching her figure. We’ve yet to find something she won’t eat. Among her other faves are pumpkin, acorns, and live FROGS 🤢.

If your pug could talk, what would she say?

She does talk! She’s getting pretty good at saying “I love you.”

If your pug had thumbs, what would she do?

If your pug could drive, what kind of car would she drive?

How is she faring with the stay-at-home order?

She’s in heaven, lots of snuggling. She’s also a huge sunbather so she’s spending lots of time in the backyard.

Anything else you want to add?

Just want to give a huge thank you to Kim, Melody, Renee, Jennifer, Johnny and all the others who were involved in bringing her to our family We can’t imagine life without her!

Meet Sophie and Simba, two pugs living their best lives in the Bay Area! Let’s hear more about them from their mom, Audrey.

With Sophie, I got bored watching the Sex and the City movie and started persuing the Internet when I saw her face on Petfinder. I put in the application that night and picked her up a week later when I got back from Ireland.

With Simba, my partner Rose fell in love with his face, and we decided to foster to test the waters. Of course, we failed as foster parents and kept him!

Both dogs captured our hearts immediately.

What’s their adoption story from your perspective?

Sophie was an owner surrender. Kim, the rescuer, said that she was treated badly. Rose and I have made sure to spoil her very day.

Simba broke my heart. He was a stray that came from a high kill shelter. He had been a street dog and was malnourished, which is why he’s so small. Not too long after I started fostering, one of my friends was murdered by her husband, and Simba became my emotional support. He still is.

How did you know they were the “one?”

The minute we saw their faces!

Simba is my rock...my emotional support

Describe the day and your feelings the moment you met your pug.

It was an OMG moment when we met both! Rose and I drove in a snowstorm to pick up Sophie. The minute Rose saw her, she scooped her away. I picked Simba up at SFO and brought him home. I couldn’t get enough of him. He’s my rock. 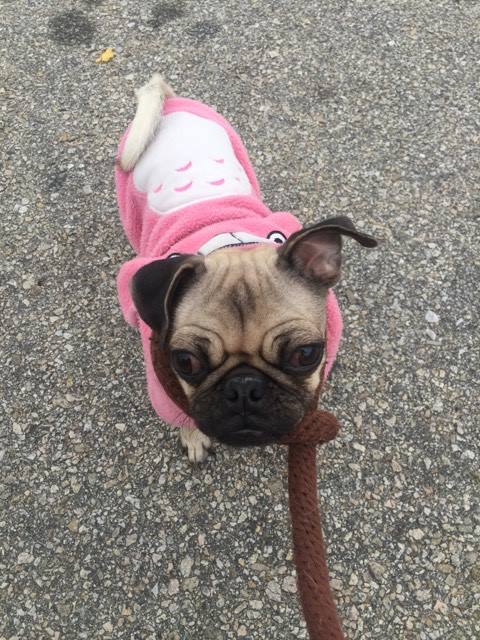 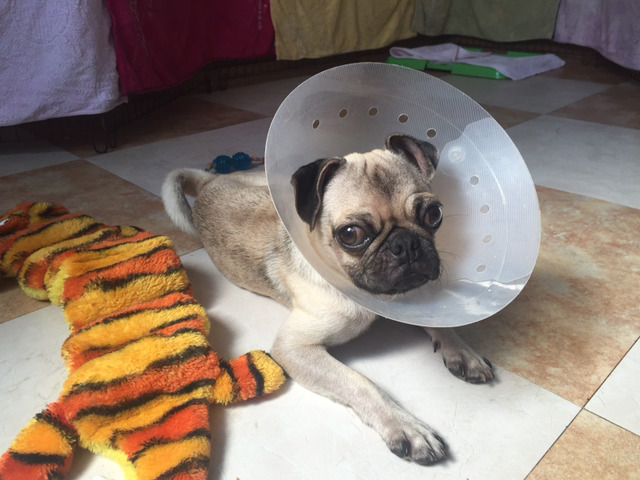 Above: Simba in Korea

Sophie is the biggest lover in the world. We call her “hot lips” and “make out queen,” because she’s always ready to lean in for an open-mouthed kiss. Occasionally, she gets lucky and gets her tongue in someone’s mouth. She’s even tried a few times with the cat, which doesn’t go over well. Simba on the other hand is a lover and a fighter. Because his face is so smashed, he can’t reach his hind quarters, so he constantly begs for a butt scratch. When he doesn’t get one, he throws a tantrum by spinning in a circle and growling. Rose has become our resident butt-scratcher so she gets the brunt of his tantrums. How has your pug fit in with your family and in your home?

Both pugs moved in without any issues. Everyone immediately fell in love with Sophie and Simba fits right in with the craziness of his brother Nick and sisters, Frida and Sophie.

Sophie and Simba are the best thing that ever happened to my family.

What’s their favorite food, or rather--let’s make this pug-appropriate-- is there anything your pug won’t eat?

Bones. Simba loves raw soup bones. He gets so happy with his bones that he carries them around for days after. Sophie likes food. All food. All the time. She is the first one at the table when anyone eats.

If your pug could talk, what would they say?

Sophie: "Can’t we just lay in bed all day and snuggle while you feed me delicious treats?"

If your pug had thumbs, what would they do?

Sophie would open the refrigerator.

If your pug could drive, what kind of car would they have?

Both would drive Audis, like their parents, of course. Anything else you want to add?

These two are the best thing that ever happened to my family. I can’t begin to tell Kim and Renee how happy I am. My neighbor’s daughter wants to grow up to be just like me: a crazy lady who owns 2 juggles and 2 pugs!

This handsome fella is Theo! He’s living his best life in LA now—a much improved life from where he started.

His start in Korea was rough. His former owner was mentally ill, who meant well but was not equipped to take care of Theo.

“When I picked up Theo, we met at the train station. Owner was very stressed, high anxiety. Eccentric-looking and spoke strangely. After I got him, she messaged and called often. Her mind was up and down. It was difficult for me. Then finally she would say, please take care of my dog,” said his rescuer, Kim.

How did you happen upon this pug?

We found him on Petfinder, which lead us to Happy Angels, which led us to Pug Rescue of Korea!

Theo went through a lot with his pug mom in Korea, but he was ultimately forfeited. He needed multiple surgeries for hip dysplasia, patella problems, and bladder crystals. Poor guy! Kim took him in and took good care of him through his recovery until he was ready to be fostered in the States by the amazing Jan Roberts (Theo calls her Mama Jan). She helped him continue his recovery and fostered him for several months before we found him!

Theo with his foster sister, Jelly

How did you know Theo was the “one?”

When we went to "Mama Jan's" house to meet Theo for the first time, he was still recovering and a little wobbly on his feet. He spent a lot of the meet-and-greet lying in bed with his foster sister, Jelly, who was young and rambunctious. We knew Theo was "the one" watching him interact with Jelly: she laid on him, nibbled on his ears, squished him, and tried to get him to play. Theo was happy to just lay there patiently, letting her have her fun; that's Theo! Little did we know that many days later, he would be the same way with his little brother Buddy (also from Pug Rescue of Korea!).

Theo and his little brother, Buddy

Describe the moment you met him.

Well, the moment before we met him, my husband and I drove by Theo as he was out for his walk. He was so cute, we fell in love instantly! Before we went in to officially meet him, I cried with nervousness because I really wanted him to be ours! I remember crying to my husband, saying, "I just hope they like us!" Thankfully, it was all meant to be!

We believe there's no pug like Theo! He is a very chill, relaxed pug. Nowadays, he's such a slow walker that we don't even need the leash anymore! He's so chill that when guests are over, he just lays there; we say he "makes them work for it." But once he knows you, he loves a rub down and will lay and warm your feet.

The only time he's not chill is when it’s time to eat! He eats first thing in the morning and his dinner time is 5pm. But, by 3:30pm, his biological clock starts going off, and he’s begging us to feed him!

Aside from eating, he also loves his "binkies" (stuffed toys) and is very possessive of them. He likes to hold them in his mouth while he takes naps - sometimes he'll even sigh loudly and make noises like he's really happy and content! Also, like most pugs, he snores very loudly—so loud that he can't sleep in our room with us. Instead, we let him fall asleep in our room and then once he's asleep, we gently pull his bed into the living room! He also loves to sleep with his chin on our legs or wrapped up in a blanket. He is the sweetest and such a funny boy!

Theo is our baby, our son, our sunshine.

How has Theo fit in with your family and in your home?

What’s his favorite food, or rather--let’s make this pug-appropriate-- is there anything your pug won’t eat?

There's NOTHING he won't eat! If Theo could talk, what would he say?

"Can I please have more food?" If he had thumbs, what would he do?

Open the cabinet where his kibble is and gobble it ALL down!

If Theo could drive, what kind of car would he have?

Theo would have an old Oldsmobile! 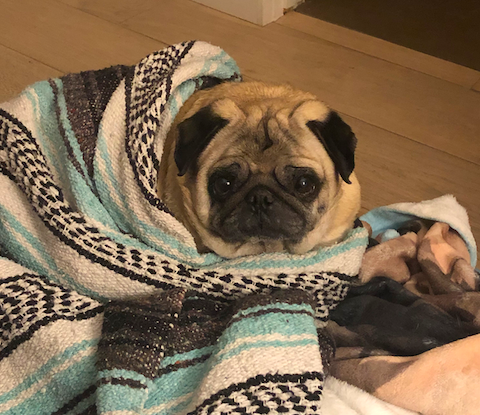